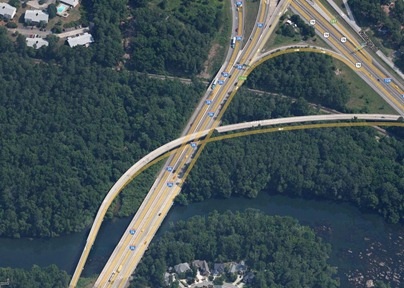 State transportation officials hope extra money set aside for South Carolina roads can be used to help get a jump start on several interstate widening projects, reports The Island Packet.  Department of Transportation commissioners approved a list of seven projects last week that they want to be completed first, based on a priority ranking from DOT employees that was created by the Legislature.

Improving the Interstate 85-Interstate 385 interchange in Greenville is at the top of the list. The project is ready to go as soon as money to pay for it is in place. The DOT board sent he list to the State Infrastructure Bank, along with a resolution asking the bank to follow it. But the bank, which helps finance major road projects in the state, doesn’t have to follow the commission’s wishes. The bank’s board and DOT officials will meet next month.

The bank has been a sore spot for lawmakers in recent years, who accuse members of preferring project along the coast. Six of the seven projects on the DOT priority list are well inland.  “We’re hoping they are going to follow the list. That’s the message I’m going to take to the meeting,” said DOT Commission Chairman Johnny Edwards, who is a member of both boards.

The board’s action comes less than a month after lawmakers approved a bill that used a combination of borrowing, new revenue from growth and reallocated sales taxes from vehicles to raise up to $1 billion for the state’s roads and bridges over the next 10 years.

DOT commissioners want the Infrastructure Bank to use some of that newly available money for the I-385 project, which Is estimated to cost $240 million. That would free up additional money for the six other interstate projects, which also can get federal funding. The other project the DOT want to complete are:

The highway funding bill also includes extra money for bridges and other roads that the DOT is trying to prioritize. “The goal is to stretch these dollars as much as we can,” DOT spokesman Pete Poore said.  Read More.