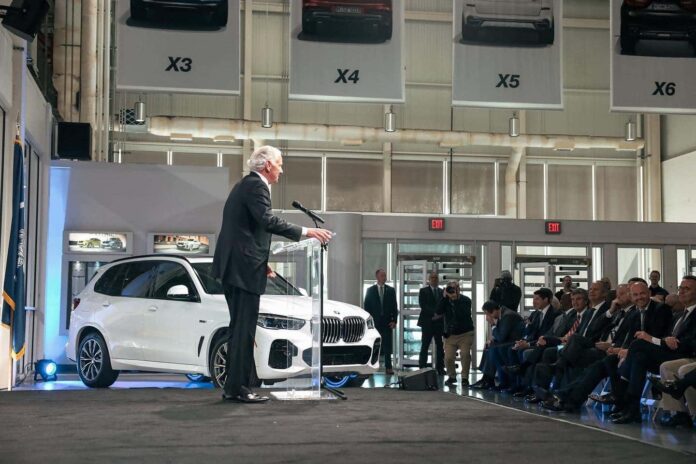 BMW Group has announced a $1.7 billion investment in South Carolina operations, including $1 billion to prepare for production of electric vehicles at Plant Spartanburg, and $700 million to build a new high-voltage battery assembly facility in Woodruff, S.C.

“South Carolina is booming and today we added to that growth as BMW announced the largest capital investment in state history of $1.7 billion,” said Governor Henry McMaster. “This shows the trust that companies have not only in the state of SC but in our great people.”

The new high-voltage battery assembly facility – over a million square feet of space – in Woodruff near Plant Spartanburg will create 300 new jobs.

The Coordinating Council for Economic Development approved a $65 million Closing Fund grant to Spartanburg County to assist with costs related to the project.

“BMW’s sustained and impactful presence in South Carolina demonstrates the power of partnership and shared commitment to our state’s automotive industry success,” said McMaster. ” With today’s announcement of a $1 billion expansion to Plant Spartanburg for manufacturing electric vehicles as well as $700 million for a new plant in Woodruff to assemble battery units, the road to the future is here.”

Plant Spartanburg was built 30 years ago and currently has more than 11,000 employees and has an annual capacity of up to 450,000 vehicles.

“This is a very important step for Plant Spartanburg as we continue our legacy of producing high-quality vehicles, and build on the success of the last 30 years,” said BMW Manufacturing President and CEO Dr. Robert Engelhorn. “With this latest investment, we futureproof our operations and prepare the plant for electrification and new technologies, ensuring both the long-term success of our company and our position as an attractive and viable employer in the state of South Carolina.”