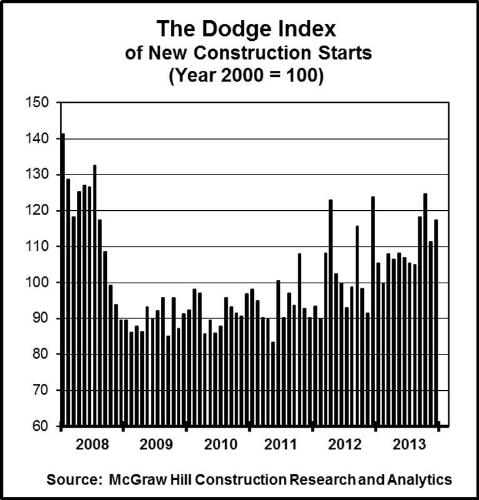 The institutional building categories in December were mixed.  Educational facilities grew 5 per cent, helped by the start of a $213 medical research building in Boston MA and a $151 million college science building in Chicago IL.  Healthcare facilities in December jumped 30 per cent  from the prior month’s subdued amount, and featured groundbreaking for an $80 million hospital in Virginia and a $70 million cancer center in Wisconsin.  The smaller institutional categories generally weakened in December, with public buildings (courthouses and detention facilities) down 32 per cent ; churches, down 44%; and amusement-related work, down 46% (compared to the previous month which included the $763 million Vikings Multipurpose Stadium in Minneapolis MN).  The transportation terminal category retreated a slight 1% in December, and included the start of a $230 million terminal renovation project at Los Angeles International Airport.

For 2013 as a whole, nonresidential building increased 7% to $168.6 billion, shifting to an upward direction after the 5% decline reported for 2012.  The commercial categories overall advanced 16%, faster than the 13% gain witnessed in 2012.  The strongest gain by commercial category was registered by hotels, up 28%; followed by warehouses, up 27%; office buildings, up 17%; and stores, up 1%.  The small 2013 increase for stores was limited by the comparison to 2012 that included the $400 million renovation to Macy’s flagship department store in New York NY.  The manufacturing building category in 2013 surged 36%, helped by the two large chemical plants in Louisiana reported as December starts as well as by such projects as a $1.7 billion fertilizer plant in Iowa, a $1.7 billion natural gas processing plant in West Virginia, and a $1.5 billion industrial gas products plant in Louisiana.  The institutional building group during 2013 decreased 3%, less severe than declines of 9% in 2012 and 11% in 2011.  The two largest institutional categories performed as follows – educational buildings, down 1%; and healthcare facilities, down 6%.  The smaller institutional categories showed this pattern for 2013 – amusement-related work, up 25%; transportation terminals, down 2%; churches down 11%; and public buildings, down 27%.

Residential building in December dropped 6% to $205.3 billion (annual rate), with both sides of the housing market easing back.  Single family housing slipped 3%, as recent months have shown more of an up-and-down pattern after the consistently steady gains witnessed earlier in the year.  When viewed on a quarterly basis, single family housing still registered consistent growth during 2013, with the fourth quarter up 8% compared to the first quarter.  Multifamily housing in December retreated 13% after November’s increase of the same magnitude.  December’s largest multifamily projects were smaller in scale than what had been reported in the previous month, but still included such substantial entries as a $159 million apartment building in Sunny Isles Beach FL, a $128 million condominium tower in Honolulu HI, and a $127 million apartment building in Brooklyn NY.

Nonbuilding construction in December soared 40% to $180.6 billion (annual rate), which was the highest monthly rate during 2013.  Bridge construction jumped 210%, boosted by the $1.5 billion Goethals Bridge replacement project in Staten Island NY and Elizabeth NJ.  Other large bridge projects that were entered as December starts were $380 million for bridge construction in Stillwater MN and $297 million for bridge construction on the I-35W reconstruction project in Texas.  The highway construction category also had a strong December, rising 19% with the help of $693 million allocated to highway work on the I-35W project in Texas.  River/harbor development in December rose 21%, supported by the start of a $290 million seawall replacement project in Seattle WA.   Sewer construction in December increased a moderate 6%, while water supply construction fell 6%.  The miscellaneous public works category (which includes such diverse project types as pipelines, mass transit, and outdoor sports stadiums) dropped 14% in December, although it did include a $425 million stadium renovation project for Texas A&M University in College Station TX.  The electric utility category in December departed from its generally downward trend during 2013, rising 127%.  Large power plant projects included as December construction starts were two natural gas-fired plants located in New Jersey ($842 million) and Pennsylvania ($800 million), as well as three wind power facilities located in Texas ($300 million and $200 million) and Oklahoma ($225 million).

For the full year 2013, nonbuilding construction dropped 12% to $142.7 billion.  After achieving a record high in current dollar terms in 2012, new electric utility starts plunged 57% in 2013.  In contrast, the public works portion of nonbuilding construction increased 9% in 2013, a resilient performance given concerns that tight government budgets would dampen activity.  Of the public works project types, bridge construction showed the largest percentage gain, climbing 55%.  Aside from what was entered into the December construction start figures, large bridge projects in 2013 included the $3.1 billion Tappan Zee Bridge replacement project across the Hudson River in New York and $1.6 billion for work on the Ohio River Bridges in the Louisville KY and southern Indiana area.  With highway construction up 10% in 2013, highway and bridge construction together registered a 21% gain for the full year.  The top five states for highway and bridge construction in 2013, ranked by the dollar volume of activity, were – Texas, New York, California, New Jersey, and Virginia.  The environmental public works categories posted annual gains for 2013, as follows – river/harbor development, up 30%; water supply systems, up 10%; and sewers, up 1%.  The miscellaneous public works category fell back 18% in 2013, following a 61% increase in 2012, due primarily to a sharply reduced amount of new petroleum and natural gas pipeline starts.

The 6% gain for total construction starts at the national level in 2013 was the result of gains in four of the five major regions.  Showing the strongest growth was the Northeast, up 17%; followed by the Midwest, up 9%; the West, up 8%; and the South Central, up 3%.  The South Atlantic was the one major region to experience a decline in 2013, dropping 3%.  The South Atlantic’s shortfall reflected the comparison to 2012 that included the start of two massive nuclear facilities, located in Georgia and South Carolina.  If electric utilities are excluded from the construction start statistics in the South Atlantic, then total construction for that region in 2013 would be up 19%.