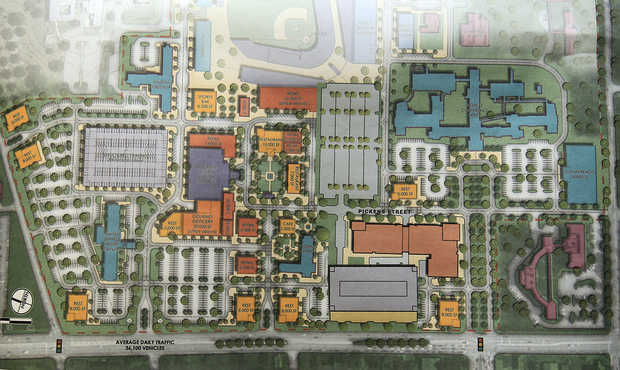 Landmark redevelopment of the old State Hospital campus along Bull Street in Columbia could begin as soon as this fall, Greenville OnLine reports Greenville developer Bob Hughes told The State newspaper in his first public comments on the project in nearly three years. The Bull Street sale — a decade in the making — is considered to be the largest and most significant land deal in modern Columbia history, promising to transform the downtown area with thousands of homes, stores and offices. Hughes said he withheld public comment on his plans because he didn’t want to affect the negotiation of a development agreement with the city, which was approved by Columbia City Council on July 9.

In an extended interview at his office in downtown Greenville, Hughes said he didn’t ask for the controversial July 9 deadline for the city to approve a development deal — a date just two weeks after a draft of the development agreement was made public. But he said he didn’t know if he would have extended his $15 million contract with the Department of Mental Health to purchase the property past its July 31 expiration. “I couldn’t figure out what we would have extended it for,” he said.

Hughes said the project, which has been estimated to spin off $1.2 billion a year into the local economy once it is built out over the next two decades, has huge potential. After the initial excitement about the sale of the property waned amid the worst recession in a lifetime, a large group of once interested developers decided to build elsewhere, he said. But as he has gained momentum in recent months, he has been able to attract the interest of 20 to 30 national developers, he said. “ Development comes in waves,” Hughes said. “And the stuff that is going to flow to us in the fall is going to be better than the stuff that flowed away.” How it will look

The walls of Hughes’ “war room” in a modest, one-story, 1940s-era office building on Church Street in Greenville are covered with nearly 20 different configurations of how Bull Street could develop.

All of the configurations are generally the same: A re-purposed Babcock Building; a centrally located ballpark; stores and offices along Bull Street; apartments and townhouses along Calhoun Street; medical buildings, apartments or offices along Harden Street. The layout conforms generally with the walk-able, tree-lined “new urbanism” layout developed by planner Andres Duany after a series of public meetings held about a decade ago.

All of the configurations are also somewhat different, allowing for flexibility to absorb office buildings, apartment complexes, a hotel, major retailers or other large buildings as Hughes is able to attract them. “You try to put the big rocks in first,” he said.

The most recent iteration — a proposal from a developer whose name is blacked out on the map — shows a possible Phase 1. A large building with retail on the first floor and offices above is situated along Bull Street near the magnolia-lined entrance to the property. Smaller buildings with shops and restaurants stretch to the east to a baseball stadium located in the center of the property, to the northeast of the Babcock Building and its iconic red cupola.

Among the ideas are separating the two wings and the large dining buildings into different uses that could be marketed to different developers — rather than finding one developer to take on the entire renovation project, estimated at $60 million

Every configuration in Hughes’ office features a baseball stadium, located either directly to the east of the Babcock Building or to the northeast. Hughes said he has talked to officials of both the Class A South Atlantic League (the former affiliation of the old Capital City Bombers) and the Advanced A Carolina League. He said he is confident that a team would be available if the city partners with the owners to build a stadium.

Columbia is the biggest market in the nation without a minor league baseball team, he noted. But Hughes said that the city, not he, would have to make that deal. “If the city wants a team, the city can get a team,” he said.

As for historic buildings, Hughes said he would like to save the small outbuildings located to the east and north of the Babcock Building — he mentioned the Ensor laboratory and the bakery in particular — but so far has not come up with a use for them. “Just because it’s not in the development agreement doesn’t mean it’s going to be torn down,” he said. “but if people can’t use the building, it can’t be saved.”

He added that criticism that he didn’t give the community enough time to discuss and find solutions for the buildings was unfounded. He noted he agreed to save dozens of trees and 70 percent of all the square footage of historic buildings on the property. “I compromised with the preservationists and the tree people for two and half years,” he said. “There has been tons of compromise.”

Hughes downplayed the politics that surrounded the sale of the property — a process that started in Gov. Mark Sanford’s administration, wound through a lengthy S.C. Supreme Court hearing and culminated with 21/2 years of negotiations with the city. “I have the patience of Job,” he said when asked if he ever contemplated walking away from the deal. Hughes has been through similar negotiations with Greenville and other cities, “and they all are different,” he said, without elaborating. “We’re just getting started gathering all the good ideas we can gather,”

he said . “Everybody thinks the hard part is getting an (development) agreement. But doing the deal (with other developers) is the hard part.” Read More.