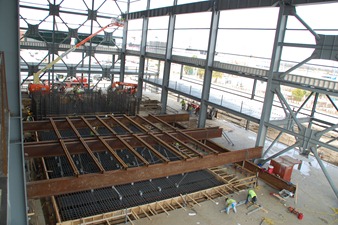 The building’s foundation is almost seven stories deep. The pit already has approximately 450 tons of reinforcing steel, weighing roughly as much as 250 mid-size cars. When complete later this year, the facility will have the capability for full-scale highly accelerated testing of advanced drivetrain systems for wind turbines in the five- to 15-megawatt range.

The project has taken months of planning and thousands of hours of preparation and field work. Engineers must consider environmental conditions, influence from local traffic and other factors that could cause an inconsistent flow of concrete.

The project broke ground in October 2010 and construction began in 2011. Last May, the engineering team poured the foundation for the smaller, 7.5-megawatt test rig, requiring 750 cubic yards of concrete.

The project involves completely redeveloping an 82,000-square-foot warehouse on the former Navy base. Engineering design was performed by AEC Engineering of Minneapolis.

In November 2009, Clemson and its partners were awarded a $45 million grant from the U.S. Department of Energy, which was combined with $53 million of matching funds, to build and operate the large-scale testing facility for next-generation wind turbine drivetrains.  Read More.

Kiawah Island: New 100-room hotel to be opened in March