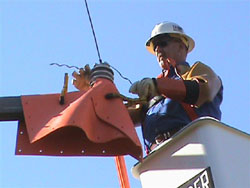 “We are fortunate to have two strong leaders at Klondyke and we are taking this opportunity to ensure an orderly transition in leadership,” Pike Electric Chairman and CEO J. Eric Pike said in a statement.

“Howard founded Klondyke in 1984 and under his direction the company has experienced tremendous growth both in size and diversity of projects. It has been Howard’s desire to become more involved in the day-to-day operations and with McClain’s knowledge and experience we feel now is the time to make these moves,” Pike added.

McClain joined Klondyke Construction in 2003 as vice president and CFO and became an owner in 2007. McClain and Howard sold the company to Pike in 2010. Prior to Klondyke, McClain established and served as vice president, general manager and director of ACM Equipment Rental and Sales, a construction equipment distributor and rental company.  Read More.