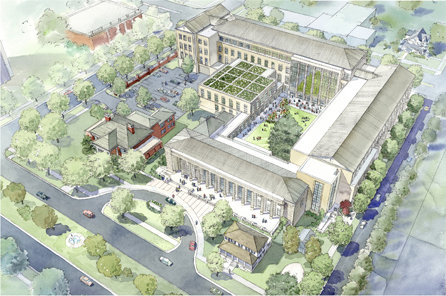 Work on the long-planned new University of South Carolina law school could start early next year with the first students using the building as early as 2016 – a year before the school’s 150th anniversary, reports The State newspaper. “We have been working a long time, and a lot of people have put a lot of energy into this and to see this finally become a reality is exciting,” USC trustees chairman Gene Warr said.

After 14 years of raising money, USC has $66 million of the $75 million needed to build the school in the block bounded by Gervais, Pickens, Senate and Bull streets. The money has come from a combination of alumni and corporate donations, school bonds and state appropriations.

USC hopes to get the rest by collecting more money from donors and winning a federal tax grant aimed at revitalizing low-income neighborhoods, said Henry McMaster, a former S.C. attorney general who is leading the law school’s fundraising efforts. The school also could get proceeds from legal settlements won by the state in which Attorney General Alan Wilson, an USC alum, has the discretion to determine the beneficiary, McMaster said.  “We’re in the final lap,” he said of the school that has graduated roughly two-thirds of S.C. lawyers.

The school plans to present trustees with a financing plan in February. Once financing is in place, work – including design, approvals and construction – will take three years to complete, USC law school dean Robert Wilcox said. “I’m glad to be able to say we’re getting close.”

Uncertainty about the school’s location and leadership as well the post-9/11 economy and recession slowed fundraising efforts, McMaster said.

Selecting the Senate Street site last year helped spur donations and win a $10 million appropriation from the state, McMaster said. He also credited USC president Harris Pastides for making the new law school a priority and Gov. Nikki Haley for not vetoing the state’s most-recent contribution for the building, which came after a previous $10 million bond issue.

The school’s current 39-year-old location on Main Street does not have the updated classrooms and technology that students expect, Warr said. “The building is in bad shape,” said Warr, a 1985 graduate of the law school. The new building “will modernize the practice of law in the state.” USC’s Hospitality, Retail and Sport Management college is expected to move into the current law school building. That school currently is in the Carolina Coliseum.

Across Gervais from the planned new law school site, USC hopes to turn the historic Whaley House – the one-time Dunbar Funeral Home – into its children’s law center. The Historic Columbia Foundation is in the midst of $500,000 of exterior repairs to the 120-year-old Queen Anne-style home.

The school is trying to raise $4 million – in addition to other fundraising efforts for the law school – to upfit the Whaley House’s interior, Wilcox said. The goal is to open the children’s law center at the same time as the new law school. Read More.