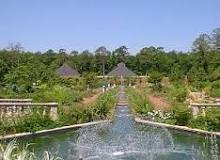 Three years from now, visitors to South Carolina’s Riverbanks Zoo and Garden will gather around palmetto trees and animal statues in a spacious new entry plaza, then stroll onto a replica of a San Francisco wharf to watch sea lions play, reports the Charlotte Observer.  On the garden side of the SaludaRiver, kids will be able to play in treehouses, a splash pad and interactive exhibits in a Children’s Garden.

Those projects, funded primarily by $32 million in public funding approved last year, promise to be every bit as transformative as the Aquarium Reptile Complex in 1989, the Botanical Garden in 1995 and the new Birdhouse, gorilla and elephant exhibits in 2002, said Riverbanks CEO Satch Krantz.

For years, Krantz cringed as school buses dropped off kids in an area where vehicles are driving through the parking lot, with only a small plaza and sidewalk for the kids to gather. Not only is it a safety concern when multiple buses arrive, the small entry plaza, even with the lush vegetation border, gives a poor first impression.

“It’s like we have this gorgeous Southern Living home with an ugly front door,” Krantz said. “It lacks the amenities that an attraction with 1 million (annual) visitors should have.”

The planned new plaza – about 250 feet wide – will replace 150 parking spaces directly in front of the current ticket booths. Palmetto trees and iconic animal sculptures will dot the plaza. Krantz envisions families stopping to take photos with the animal sculptures and a Riverbanks sign in the background.   Buses will drop off children at the edge of the plaza, and no vehicles will be allowed through the area. An outside-the-gates restroom also will provide some relief to kids after a long bus ride.

A new gift shop on the left side of the entrance will have 4,500 square feet, as compared to 2,000 square feet in the current shop just inside the entrance. The new guest services building on the right will have 10 ticket booths, ticket offices and a guest services area for tourism questions, lost-and-found and first aid. There also will be a special room for nursing mothers.  “This is finally going to give Riverbanks the front door that it deserved for the past 20 years,” Krantz said.

The current ticket booths, gift shop and the grizzly bear exhibit will have to be torn down to make room for the new buildings. The grizzlies will be moved to where the baboons are now, the baboons will move next door to the hyena area and the hyenas will end up at another zoo.

The old baboon exhibit will be torn down and rebuilt with a modern design that removes the moat and allows visitors to get closer views of the grizzlies. CLR Design, the zoo exhibit specialists working with project architect Jumper Carter Sease, managed to tuck an otter exhibit between the entrance and the grizzlies.   It would be the first otter exhibit at Riverbanks, but the otters are on the if-the-money-stretches-far-enough list, Krantz said.

The expansion also includes a new children’s garden and more parking adjacent to the current botanical garden on the north side of the river. Those projects, which require less heavy construction, aren’t included in the preliminary construction schedule.

By chance, four American zoos built new sea lion exhibits last year. Krantz and Riverbanks officials visited three to steal ideas. Two had the rocky coast appearance of the old Riverbanks sea lion pool, which closed in 2009. The Riverbanks team was more impressed with the one at Hogle Zoo in Salt Lake City, built to resemble a coastal cannery.

The Riverbanks team opted for a design based on San Francisco’s Pier 39, where sea lions oddly began congregating in 1989 and have since become a tourist draw.

“There was lots of discussion on this,” Krantz said. “We could show them in a natural habitat, a rocky seashore. But sea lions also live with people in places like Pier 39.”  The pierlike structures will provide shade for watching the sea lion feeding and training, and one of the structures will house an underwater viewing area.

The sea lion exhibit will replace the lemur exhibit just inside the zoo entrance. That will give visitors a chance to check in on the playful sea mammals on the way in and out of the zoo.

Riverbanks tore down its old sea lion exhibit in part because the water filtration equipment was worn out and would be extremely expensive to replace. The $20 million set aside for the new entry plaza and sea lion exhibit also covers another building that will house a new pump and filtration system.

The old sea lion exhibit wasn’t designed for large crowds. Small children had to be held up to watch the feedings, and even adults had trouble seeing if the crowds along the railings grew large. The new exhibit features multiple spots to watch the feedings from different levels, including an area set aside for children.

Kids also will be drawn to a new 2-acre children’s garden just south of the current main garden. The project details haven’t been worked out yet, but initial plans call for interactive exhibits, treehouses, streams, lagoons and a splash pad. An educational building will be equipped for cooking demonstrations, using produce kids can pick from a neighboring vegetable garden.

Before those glamour projects begin, however, parking and traffic safety concerns will be Job No. 1. Getting people smoothly off I-126 and into the zoo always has been a challenge because the property, surrounded by the SaludaRiver and a CSX railroad line, has only one entrance on the north side of the river. The problem has become even more of a headache in recent years because of the zoo’s growing popularity.

Annual attendance has jumped from an average of 800,000 in the early 2000s to more than 1 million in recent years. Historically, the dozen or so busiest days brought 8,000-9,000 to the zoo. Recently, that has jumped above 10,000.  “That was a tipping point for our existing access and parking,” Krantz said.

On the busiest days, the 1,100-space main parking lot is full by 10 a.m. The traffic begins to back up onto I-126 and gets worse as the first wave of visitors begins to leave around 11 a.m.  The solution is more parking, a better traffic flow pattern and, possibly, tunnels under the railroad tracks.

The zoo began working on the parking a few years ago, spending nearly $2 million raised by the Riverbanks Society to buy property on Rivermont Drive, the frontage road that separates the zoo from the interstate. The zoo has been using nearly 200 spaces on the Rivermont property for overflow parking on busy days.

The zoo is also exploring the possibility of building a wide pedestrian tunnel under the railroad tracks, providing a straight shot from the Rivermont parking lot to the ticket area. If all of the construction is completed on schedule, visitors will be entering through Riverbanks’ new front door by February 2015 and sea lion fans will line the pool February 2016. Read More.