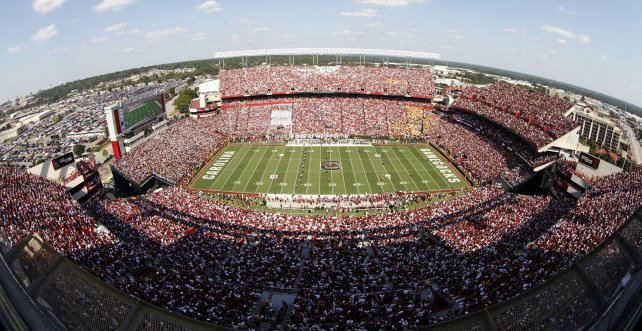 The University of South Carolina Board of Trustees approved approximately $53 million in construction projects which will upgrade intercollegiate athletics facilities on the Columbia campus reports Beach Carolina Magazine. The action was taken at the Feb. 28 meeting of the Board of Trustees, which was held on the USC-Aiken campus.

“These projects will allow us to compete at the highest level in intercollegiate athletics,” said Carolina Director of Athletics Ray Tanner. “We are appreciative of the vote by the Board of Trustees to turn these plans into action.” Among the projects approved by the Board of Trustees was Phase II of the Football Indoor Practice Facility, which will be constructed on the west end of the Farmer’s Market site, and the addition of new practice fields adjacent to the practice facility. The indoor facility will have a regulation 100-yard turf football field and include restrooms, training rooms and film towers.

The Board of Trustees passed improvement projects to Williams-Brice Stadium, including renovations to the plaza surrounding the stadium. The plaza will provide an aesthetic look to the entrance of Williams-Brice Stadium, including beautiful greenery, brick entrance ways and will create an institutional landmark for visitors, fans, students and alumni.

Facility projects were also approved for a building located next to the Eugene E. Stone III Soccer Stadium, which will house locker rooms, weight room and a video room. Upgrades are also scheduled for the Athletics Village, including the Weems Baskin Track, Field House and Tennis Complex. Read More.

Outlook for construction industry improves for 2013