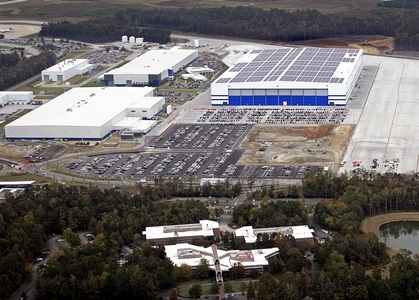 South Carolinians can expect more stable growth across a broader array of industries in 2013 if Washington strikes a deal and averts the fiscal cliff, say University of South Carolina economists. The growth would mean more jobs and greater income for the state’s residents.

The Berkeley Independent reported on the Darla Moore School of Business’ 32nd Annual Economic Outlook Conference held on Dec. 12 at the University of South Carolina.

Job creation – the most important measure of economic progress in South Carolina – is expected to grow 1.2 percent in 2013, according to forecasts presented by Doug Woodward and Joseph Von Nessen, economists in the Moore School’s Division of Research. Last year they predicted employment growth of 2 percent, which came very close to South Carolina’s performance of a 1.8 percent increase based on a comparison of October 2011 and 2012 employment figures.

Von Nessen, who said the Palmetto State has seen steady growth in 2012, will see growth in the coming year from industries that extend beyond manufacturing.  “Though manufacturing has largely been responsible for South Carolina’s economic recovery, we’ve started to see other industries expand this year, and we expect more diverse growth in 2013,” Von Nessen said.

Gains are expected in transportation and warehousing, health care, education and even construction, an industry that has been hard hit during the recession.

“Residential construction turned a corner in 2012,” Von Nessen said. “Sales activity is up and house prices are rising again, which suggests a better year for housing ahead.”

Von Nessen expects construction to increase throughout 2013 and anticipates industry job growth for the first time since 2008.  However, he said the nation and state are at a precipice, facing prosperity or peril depending on the actions of Congress.

“The demand is there, but the resolution of the fiscal cliff is a major piece of the puzzle that remains,” Von Nessen said. “We don’t know what the resolution will be, but we definitely will feel the effects in South Carolina of any increases in marginal tax rates, payroll taxes or reductions in federal funding to our state through various measures such as military sequestration or the elimination of extended unemployment benefits.”

John Connaughton, an economist at UNC Charlotte, said he expects Washington to strike a deal before Jan. 1, and expects slow growth to result in the Carolinas.  “We are going over a ‘fiscal cliff’ on Jan. 1, 2013.  The only question is how severe,” said Connaughton, Babson Capital Professor of Financial Economics. “If Congress and the president don’t reach a deal by Jan. 1, the consequences could be quite bad and the U.S. economy would enter into a mild recession during the first half of the year.

“Unemployment, nationally, could reach 9 percent by the fall of 2013.

“If Congress and the president do reach a deal, the most likely scenario is that the combined tax increases and spending cuts will be enough to slow the economy to a 1 percent or less growth rate during 2013.”

Von Nessen addressed South Carolina’s current unemployment rate of 8.6 percent, which hovers at 12th highest in the nation.  He told EOC attendees that projected job gains in 2013 should continue to bring the rate down and that much of the job creation will come from temporary hiring and contract labor.

“If workers are regularly going on and off payrolls as they take various temporary positions, we’re going to see higher fluctuations in month-to-month employment changes and the unemployment rate,” Von Nessen said.  Read More.