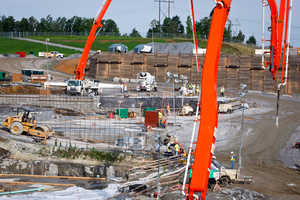 The State newspaper reports workers were laid off at the V.C. Summer Nuclear Station in Jenkinsville according to the plant’s construction contractor. The Shaw Group, lead contractor in SCANA’s $9.8 billion effort to build two new electricity-generating reactors at the plant by 2018, also did not disclose the cause for the layoffs.

The layoffs likely came in response to construction delays at the plant caused by problems pouring the concrete for the plant’s nuclear island base mat — the base for the newly-designed Westinghouse AP 1000 reactors that will be used at the Summer plant.

“The reduction in force is necessary to adjust the project staff to better align with our current scope of operation,” said Joni Wills, Shaw communication manager in Houston, Texas. “As typical with any large construction project, the workforce will ramp up and down as a normal course of business.” The layoffs may be intended to help offset project costs caused by the delays.

The construction schedule called for the concrete for the reactor base mat to be poured late last summer or early last fall, nuclear regulators said. Onsite inspectors found concerns with the reinforcement bar, however, during routine inspections between July and September.

The rebar concerns uncovered at the Summer plant were very similar to problems recently discovered at Georgia Power Co.’s Plant Vogtle nuclear construction site in Waynesboro, Ga., regulators said. Shaw announced a construction layoff at Plant Vogtle earlier this month, in which they also failed to disclose the cause for slowdown.

Those all are basically seismic concerns, he said, but they generated an inspection report with an unresolved item on it concerning the rebar at the plant. The NRC report said the three findings were of very low safety significance. “What they planned to do would be in violation of the American Concrete Institute’s code No. 349, which they were required to meet,” Ledford said.

In response to the finding, SCE&G applied recently for two license amendment requests for the Unit 2 and 3 Summer plant reactors involving base mat shear reinforcement design spacing requirements. In a January 15 letter to the NRC, SCE&G asked the commission to respond to the license amendment request by March 1, 2013. The NRC will make decisions about the requests in the coming weeks, Ledford said, without committing to the March 1 request.

Shaw said the company still has a large workforce on site at the Summer plant, with more than 1,400 personnel and expects to employ between 3,000-3,500 workers throughout the duration of the construction project. “Considerable work continues throughout the facility in the nuclear islands, cooling towers, turbine and balance of the plant,” spokesman Wills said. Read More.