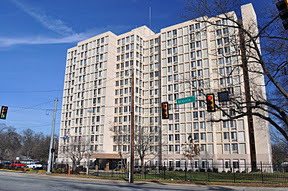 The Scott Towers housing complex in Greenville, SC was demolished on Sunday. Crews from Contract Drilling and Blasting of Jacksonville Beach, FL used controlled explosives to demolish the 14 story building that was built in the early 1970s.

Future plans for Scott Towers include redeveloping the site for 350 apartment units. Many of which will be low income subsidized housing. According to the Greenville Housing Authority, 150 units will be for senior citizens and the remaining units for families.

Preliminary work is slated to begin in mid to late 2015, with the full redevelopment to be complete in 5 years. St. Louis-based McCormack Baron Salazar is assisting the housing authority in redeveloping the area.