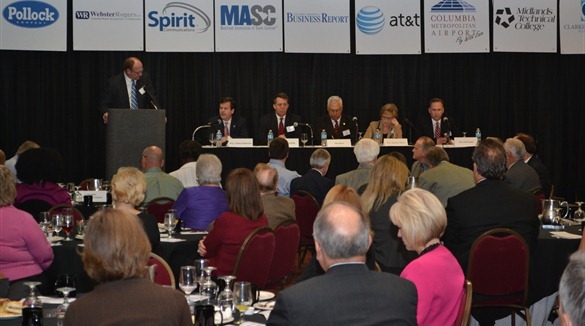 Improvement to the state’s infrastructure — particularly the interstate highway system — ranks high on the list of priorities of Midlands legislators and the state’s top business organization. That appears to be the consensus of participants in this morning’s Power Breakfast event hosted by the Columbia Regional Business Report.

GSA Business reports the state has about $20 billion worth of deferred infrastructure projects, most aimed at improving interstates 26 and 85, which serve as the pipelines of the S.C. commerce and distribution network.

With the deepening of the POrt of Charleston to accommodate larger freighters expected to begin in 2017 and new manufacturing and industry moving to the state, South Carolina needs to step up and improve its roads, said Otis Rawl, president and CEO of the S.C. Chamber of Commerce. “If we don’t get the infrastructure piece, none of this other stuff is going to happen,” Rawl said. “Businesses will start looking in other places.”

Other participants in the panel discussion agreed.  “It’s time to pay the piper and get these investments done,” said state Rep. James Smith, D-Columbia. How to pay for the work, though, is a challenge.

State Rep. Nathan Ballentine, R-Chapin, said he doubts there’s any political will in the House to vote for an increase in the state’s 16 cents a gallon gas tax, the fourth-lowest in the nation.  So the Legislature probably will have to look elsewhere for funding. One possibility, he suggested, would be to bank the revenue that the Board of Economic Advisers projects will be collected above what the state needs to meet its budgeted obligations.

Using the extra revenue, Ballentine said, would not require raising taxes. The Legislature also might look at raising the sales tax cap on cars, Ballentine said. He noted that the most a car buyer pays in state sales tax is $300 regardless of the vehicle’s cost. Before the state raises taxes, it needs to examine its spending, said state Sen. Joel Lourie, D-Columbia. “Before we can come to the taxpayers and say we need more money, we need to make sure the money we have is being spent as efficiently as possible,” Lourie said.

Still, the state needs to come up with a remedy for its infrastructure woes, Ballentine said.  “We can talk about that and give it all the lip service we want, but until we start making that a funding priority, that’s going to be one of things that’s holding back growth in the Midlands,” Ballentine said.

One possible source of cash to fix the roads might involve the state borrowing money via a bond issue, Lourie said. “We’re going to have a serious conversation,” Lourie said. “If we don’t do something business is going to go elsewhere, it won’t wait on us.”  Another panelist, Republican Katrina Shealy, who was elected last month as state senator from Lexington County, said one of her top priorities is tax reform and “making people more comfortable doing business in South Carolina.”  Read More.