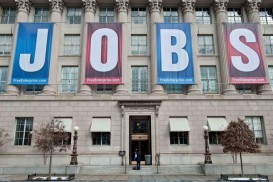 The unemployment rate in South Carolina rose to 8.7 percent from a revised December 2012 rate of 8.6 percent in January 2013, but nearly 27,000 more people in the Palmetto State were working in January 2013 compared to January 2012, according to numbers released Monday by the S.C. Department of Employment and Workforce.

The North Charleston Patch reports only the Information sector of the state’s economy saw job gains in January 2013, adding approximately 600 jobs in industries across the sector statewide.

South Carolina initially reported an unemployment rate of 8.4 percent in December 2012, but that number was revised upward to 8.6 percent by the Bureau of Labor Statistics after more information and economic data became available.

Charleston County recorded the third lowest county-wide unemployment rate in the state at 7.2 percent for January 2013, tied with Dorchester County. Roughly 164,000 members of the county’s 176,671-member-strong labor force were employed at the end of January 2013, leaving approximately 12,637 unemployed. Read More.