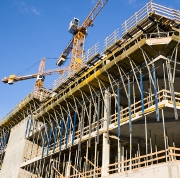 Industrial building construction will continue to experience growth over the next five years, despite declines in revenue, according to a report from IBISWorld.  Thomasnet News says this will be driven by upticks in numerous domestic manufacturing sectors and favorable lending rates.

The industrial building construction industry is responsible for constructing factories, assembly plants and mineral processing mills. Its growth is naturally dependent on the health of the U.S. manufacturing sector, as most industry projects are related to buildings used to produce and distribute goods. Interest rates, property values, and lending standards also have strong influence.

Industry revenue has fallen an average annual 1.2 percent to $45.6 billion in the five years to 2013. During this period, the industry experienced significant revenue volatility. Government spending at the federal and local levels protected the industry between 2008 and 2009 by channeling investments into manufacturing facilities and the automotive sector.

However, cutbacks in government spending, coupled with overdevelopment and slow economic growth, caused industry revenue to drop 18.2 percent in 2010. The industry returned to positive growth in 2012, when industries like the semiconductor machinery manufacturing industry expanded production, thus, increasing demand.

Growth is expected to continue over the next five years as operators benefit from an improved economy and the reinvestment of corporate profit into new manufacturing and distribution structures. Foreign demand for U.S. goods is also expected to boost industry growth. Additionally, foreign companies have expanded their manufacturing operations in the United States to be closer to their end-consumers. As a result, demand for new or remodeled industrial space is set to rise as manufacturers and industrial companies look to expand production, lifting industry revenue up by anticipated 2.3 percent in 2013.

While lending standards will likely loosen over the next five years, interest rates are also expected to rise, thereby increasing the cost of new industrial development. Additionally, more rapid growth will be stifled by the outsourcing of basic manufacturing to countries with lower labor costs.  Read More.