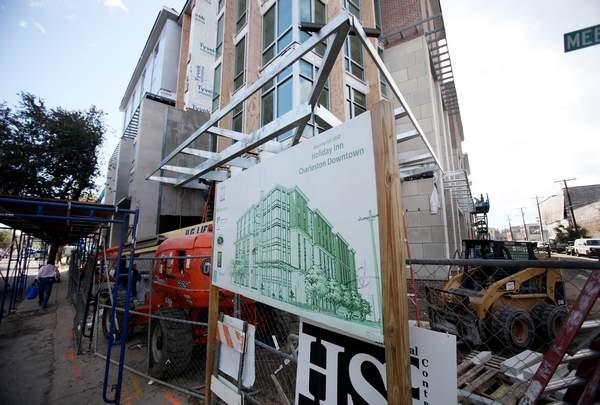 With 4.5 million tourists flocking to the city every year, a number that’s expected to grow as low-cost air carriers line up to bring them here, it was only a matter of time before developers saw the need for more rooms at the inns, reports the Post and Courier.  Close to 1,500 new hotel rooms are being built or are in the planning stages on peninsular Charleston, a staggering 43.6 percent increase over the existing 3,281 rooms in the Holy City’s downtown area.

“With the Conde Nast rankings, the general consensus is that visitation is only going to be on the rise and we will get more group business in with conventions,” said Kevin Smith in the College of Charleston’s Office of Tourism Analysis.

In 2011, readers of the high-profile travel magazine voted Charleston the No. 1 tourist destination in North America. This year, they selected the Holy City as the top tourist place in the world.  The addition of low-cost airlines has helped as well, flooding the city with new visitors from across America.  Southwest Airlines started serving the city in 2011, bringing in tourists directly from Houston, Chicago, Nashville and Baltimore, while JetBlue Airways will open up direct paths to the heavily populated Boston and New York markets in February.  Charleston International Airport reported a 30 percent increase in passengers last year with 2.5 million people passing through the terminal.

In April, the busiest tourist month in Charleston, peninsular hotel rooms showed 92 percent occupancy with an average daily rate of $203. Through October, downtown hotels have been booked nearly 82.5 percent for the year, the highest of any part of Charleston’s metro market with its more than 15,000 rooms. The average daily rate for the year on the peninsula is nearly $170 per room.  “You see these sort of numbers, and developers hope they can do the same,” Smith said.

From a new boutique inn on George Street to a planned high-rise at the base of the Ravenel Bridge, new hotel projects are covering a lot of ground.  Rising first to welcome new guests is the five-story Holiday Inn Charleston Historic Downtown at 425 Meeting St. The 80,000-square-foot hotel will open Jan. 10 in an area booming with new restaurants and apartments adjacent to the rapidly redeveloping Upper King Street corridor.

“There is definitely enough growth in the market to justify the additional rooms,” said Matthew Miller, a former longtime employee of the Mills House Hotel who is the general manager of the new Holiday Inn.  Earlier this week, Miller and Jewel Oxner of Tara Investments, which owns the new Holiday Inn, pointed out the new pool, workout room, conference area and restaurant as they navigated around construction workers putting the finishing touches on the hotel, where all parking will be by valet off Woolfe Street.  The lodging will create 35 to 40 new jobs downtown when it opens, with about 40 more during peak tourism periods. “We have already had a lot of requests for meetings, corporate functions, reunions and other groups,” Oxner said.

At almost the same time, a totally refurbished 153-room Holiday Inn Express will open on Lockwood Drive. It used to be a Best Western, but it closed in August and fell off the monthly room-count roster on the peninsula. Charlestowne Hotels now manages the all-new eight-story lodging. It’s already taking bookings.

Not far away, a new 141-room Hilton Garden Inn is rising on Lockwood along the Ashley River, while 96 rooms are planned in two Calhoun Street projects, 185 rooms are slated for the former Charleston County Library site near Marion Square and a 100-foot-tall unnamed hotel could rise at the foot of the Ravenel Bridge.

Charleston is sitting pretty for future expansion, said Vic Mills, CEO of Blanchard and Calhoun Commercial of Augusta, which develops property throughout the Southeast, including the Hilton Garden Inn on Lockwood.  “Our primary consideration is job growth,” Mills said. “With Boeing, we think the prospects over the next 10 years for Charleston are very good. And few cities in the Southeast have received such notoriety as Charleston as a tourist destination.”

With the State Ports Authority’s commitment to redevelop its cruise-ship terminal, Charleston’s publicity as a top-notch tourist destination and the proximity of the hospital cluster to Lockwood, Mills said the new hotel and its a rooftop bar overlooking the Ashley River should do well. It’s set to open by late fall 2013.

On Meeting Street, the former Mendel Rivers Federal Building, owned by Dewberry Capital, will add 161 rooms to the mix once it is converted. Farther north on Meeting, a nine-floor, 160-room unbranded hotel is in the works on a vacant lot between Huger Street and the on-ramp to the Ravenel Bridge off Meeting Street.

Jupiter Holdings of Charleston wants to build the uptown high-rise hotel with six floors of adjacent parking in an area it believes already has been discovered by Revolutionary Eating Venture’s popular nearby restaurant, Taco Boy, and other projects.  The hotel is at least a year away from breaking ground, said Fred Whittle, chief operating officer for Jupiter Holdings.  “We are looking for the right hotel to dance with,” Whittle said. “It’s like a dating game. We’ve had offers made to us, but we want to keep looking.”  He said they can’t move forward with design approval from the city until the brand is nailed down.

The reasons for flourishing interest in the downtown area by Jupiter Holdings and other developers for more hotel space are simple: The area is beautiful and the demand is there, Whittle said.  “There is almost never a bad time of year for people to come to Charleston, and people want to feel like they are on the peninsula,” Whittle said. “There is a psychology about it. It will cost more to build and be down there, but people are willing to pay more. That’s why you see people willing to invest downtown.”

The biggest project coming to the peninsula, most likely breaking ground by early spring, is the Midtown redevelopment on the southeast corner of King and Spring streets.  Rising nine stories will be a 305-room as-yet-unflagged hotel with 18,000 square feet of retail on the ground floor and 20,000 square feet of office space above it, said Stuart Coleman with CC&T real estate services. Parking will be accommodated in a 405-vehicle deck.

The hotel project has received approvals from the city, Coleman said. It’s just waiting for permit approval.  Though the project has been in the works for years and its progress stunted by the steep recession, Coleman believes the newfound interest in the peninsula is being driven by the low hotel vacancy rates and strong average daily room rates.  “The development is now moving up King Street, and there has been a lack of major hotel construction since the Renaissance (on Wentworth) was built in the late 1990s,” he said.

Near the South Carolina Aquarium, another tourist draw in the city, Dolphin Architects and Builders hopes to build a high-end, 70-room hotel, restaurant, spa and shops at Concord and Calhoun streets as part of the Concord Park redevelopment plan.

Also on the way is a 20-room inn recently approved as an addition to the Not So Hostel all-age hostel on Cannon Street, while an 18-suite upscale boutique hotel called Zero George Street, named after the address, plans to open next year in five restored buildings built in 1804 in the Ansonborough neighborhood.

“Charleston has shown itself to be a really resilient market,” said Perrin Lawson, deputy director of the Charleston Area Convention and Visitors Bureau. “Hotel occupancy remains high, and the city continues to get more accolades in the travel media. That has just fueled a desire to have a presence on the peninsula.”  Read More.