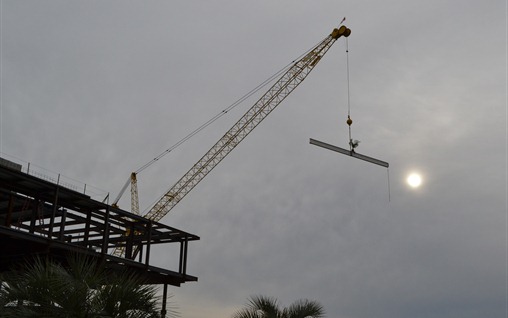 “Investment in nonresidential structures actually declined in the quarter, a reflection of the fact that the nation’s recovery, to date, has been unable to support a sustained nonresidential construction recovery, ” reported Associated Builders & Contractors Chief Economist Anirban Basu.

Evidence that the nation’s economy is being fueled by consumer purchases, nonresidential fixed investment grew 2.1 percent in the first quarter of this year, with 3 percent growth in equipment and software investments partially offset by a 0.3 percent decrease in investment in structures, according to April 26 report by the Commerce Department on gross domestic product (GDP).

Personal consumption expenditures advanced 3.2 percent in the first quarter with spending on goods increasing 3.3 percent and spending on services increasing 3.1 percent. The growth in real private inventories added 1 percentage point to GDP growth for the quarter after subtracting 1.5 percent from the fourth quarter.

Real final sales of domestically produced output—minus changes in private inventories—increased 1.5 percent for the quarter following a revised 1.9 percent increase during the fourth quarter. Gross domestic purchases—purchases by U.S. residents of goods and services wherever produced—increased 2.9 percent in first quarter after going unchanged in the fourth quarter.

Overall, the nation’s GDP grew at an annual rate of 2.5 percent in the first quarter of 2013; far short of the 3 percent economists were predicting, but higher than the 0.4 percent posted in the fourth quarter of 2012.

“Today’s GDP report is evidence that the nation’s economic growth continues to be disproportionately motivated by consumer purchases,” said ABC Economist Anirban Basu. “To the extent that businesses are participating, much of the buying momentum is not related to construction, but is more closely related to equipment and software purchases.

“The most noteworthy aspect of today’s GDP report was the evidence of shrinking government outlays at every major level of government,” Basu remarked. “Collectively, the slowing pace of government outlay growth subtracted 0.8 percent from first quarter GDP. In other words, had it not been for public sector retrenchment, GDP would have expanded in excess of 3 percent during the first quarter.

“The impacts of sequestration is likely to become more intense in the second quarter which suggests that the negative impact of government spending on the pace of economic expansion could become even more significant,” stated Basu. “ABC continues to forecast roughly 2 percent growth for the U.S. economy in 2013, with the implication being that at least one of this year’s remaining three quarters will be softer than the now completed first quarter.