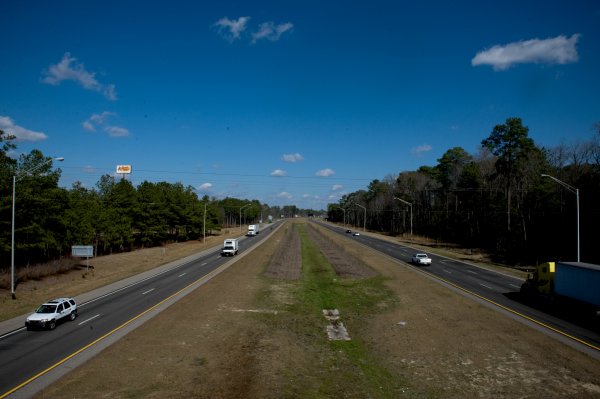 South Carolina has just about everything needed for a new company to set up shop, said Scott Barnette of Continental Tire.  There’s a Port of Charleston, a network of interstate highways, and a pro-business environment, Barnette, central controller for Fort Mill-headquartered Continental Tire the Americas, said at the 3rd annual SC Transportation, Distribution and Logistics Summit.

But Continental, which is investing $500 million in a new plant in Sumter County, does have a concern, Barnette said. The tire maker is concerned the state’s interstate highway system does not have the capacity to handle the growth that’s happening as South Carolina lands other industrial partners.  “It’s a great thing to land the industrial partners, but we have to keep up with the infrastructure needs so they can ship efficiently,” Barnette said.

The Charleston Regional Busness Journal reports the state faces a $29 billion funding shortfall over the next 20 years to repair roads, replace bridges and invest in mass transit and rail transportation, according to a state Transportation Department study. All across the state, economic development is picking up steam, and finding the money to improve the state’s infrastructure is the top issue among S.C. business leaders.

However, participants in the summit’s opening panel session, state Sen. Danny Verdin, R-Greenville, and state Sen. Lee Bright, R-Spartanburg, failed to offer much hope.  “For so many issues that come before us of great and momentous portent, there’s nothing bigger facing South Carolina than a $29 billion infrastructure need,” Verdin said.

Funding infrastructure is a core function of state government, Bright said. But if more money is going to be spent on transportation, it will have to be taken from somewhere else in the state budget like schools and health care, he said.

Some additional money for transportation infrastructure is included in the House of Representatives’ $6.3 billion spending plan, which passed earlier this month. Part of that budget includes shifting about $82 million a year from the general fund to the transportation fund.  While an improvement, the extra money is well short of the estimated average of $1.5 billion the state will need each of the next 20 years to make up for the funding shortfall.

“People have told me that if I get $80 million it’s like a raindrop falling into Lake Murray,” said Robert St. Onge,  SC Secretary of Transportation. “I’ll take it.” Verdin did say he was “favorably disposed” to a proposal by fellow Sen. Nikki Setzler, D-Lexington, that the state float a $500 million bond issue to help cover transportation costs. Neither Verdin nor Bright favored raising the state gas tax, which is the primary funding source for the Transportation Department.

The state’s fuel tax of 16.75 cents per gallon is the fourth-lowest in the nation and proceeds have been relatively flat in recent years because of the Great Recession and the fact that cars and trucks are getting better gas mileage. It’s estimated that increasing the gas tax by one penny would raise $32 million a year.

Both senators, though, said they would be open to diversifying highway revenue sources, such as charging tolls to pay for new roads or assessing user fees.  “In my part of the world, there is a lot of public concern about spending 8, 9 or 10 or more cents at the pump and building an interstate from Detroit to Myrtle Beach or finishing 10 to 12 miles of whatever it is across John and James islands,” Verdin said, referring to plans to complete Interstate 526 in Charleston County. “I’m trying to maintain an open mind.”

Bright said he supported efforts to fix and upgrade the state’s transportation infrastructure.

Not many of the summit’s attendees appeared to find much consolation in what Verdin and Bright said.  In summing up the strengths and weaknesses on the TDL front, another speaker, Brian Gwin, industrial development manager of Norfolk Southern, said: “On the downside, I think the first panel is what’s wrong. It baffles me.”  Gwin’s remark was greeted by a room full of applause.  Read More.