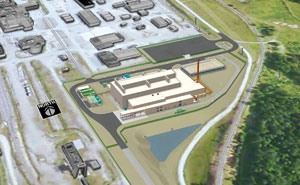 The contractor building an important facility to process Cold War waste from Savannah River Site’s underground storage tanks has agreed to a modified contract that caps future construction costs and revises the completion date to Dec. 31, 2016. The Augusta Chronicle reports the $1.4 billion Salt Waste Processing Facility, which is 72 percent complete, was supposed to commence operations in 2009, then 2011 and then delayed again until 2015 – a date the U.S. Department of Energy acknowledged in January was “no longer achievable.”

Under the terms of the modification, Parsons Infrastructure & Technology Group Inc. agreed to cap future costs at $540 million – and aim for a projected completion cost of $530 million – and will pursue incentives to reduce costs and meet the new completion date on time. Incentives include an agreement that the parties will share cost under-runs for the final completion cost, with a maximum incentive for Parsons of $30 million.

Parsons would pay half of any additional cost overruns that exceed $530 million but are less than $550 million. Cost overruns beyond $550 million are solely Parsons’ responsibility. The agreement includes a schedule incentive in which Parsons could earn up to $2 million a month for earlier completion but would pay DOE $2 million for each month past the 2016 deadline.

The Salt Waste Processing Facility will replace interim facilities at the site. The existing Saltstone Facility opened in 1990 and was modified last year to improve efficiency and prepare it for new roles after the modern plant is completed. Read More.