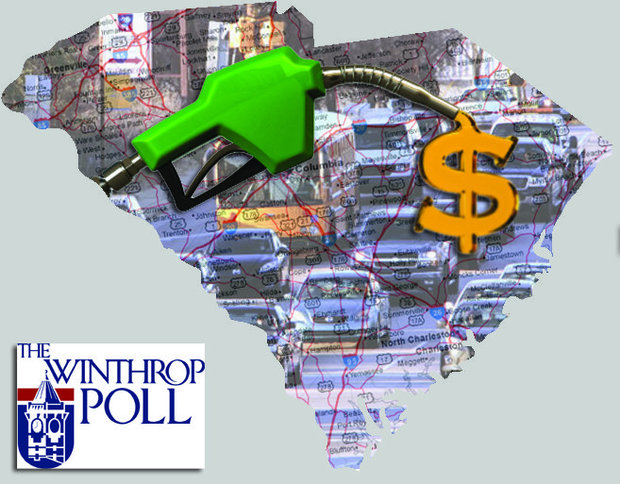 It is the second time this year the Winthrop Poll – widely cited as an indicator of what South Carolinians are thinking – found a majority of S.C. residents disagree with the decisions of their state Legislature.

The Republican-controlled General Assembly has refused to raise the state’s 16.5 cent-a-gallon gas tax – the fourth lowest in the country – despite several bipartisan attempts to increase it. The Legislature also refused to expand the state’s Medicaid program, which provides health insurance to the poor and disabled, despite a Winthrop Poll earlier this year that found a majority of South Carolinians supported that expansion.

In both cases, the majority support was not overwhelming – 50.5 percent for the gas tax and 50.8 percent for Medicaid expansion. But the results still were contrary to the outsized opposition to the ideas in the state Legislature.

“South Carolinians are not as deeply divided as our political parties are,” said Scott Huffmon, the Winthrop University political science professor who conducted the poll. “We need to be reasonable and reach a reasonable compromise.”  Politics has driven the debate on both topics.

The gas tax increase proposal came after Department of Transportation officials told lawmakers the state needed to raise an additional $29 billion in new money over the next 20 years just to maintain the state’s highway system – the fourth largest in the country.  That set off a scramble to find more ways to pay for the state’s roads.

A bipartisan group of five senators proposed borrowing $1.3 billion this year to start repairs. They also proposed a gradual increase in the gas tax – increasing it by 4 cents a gallon over the next 10 years – that would bring in an extra $131 million to help maintain roads.  The bill’s supporters refused to call it a tax increase, referring to it as a “motor vehicle user fee.”  But the backlash was swift.

State Sen. Shane Martin, R-Spartanburg, told colleagues he would race to the Senate’s lectern to filibuster any attempt to raise taxes.

“The politics of it is just maddening to me,” said Rick Todd, executive director of the S.C. Trucking Association, which supports a gas-tax increase. “It’s a squeaky close majority. But I think that means people are starting to pay attention to it.”

Supporters of a gas-tax increase say it will be almost impossible to pass unless the governor supports it. Neither candidate for governor in next year’s election does.

Earlier this year, Gov. Nikki Haley signed into law a bill that authorizes the state to borrow up to $600 million this year for road repairs, using $50 million in state income and sales taxes to pay off the debt over the next 15 years. Combined with other sources of money, the bill directs more than $1 billion to roads without raising the gas tax.

“Look at what we were able to support without increasing gas taxes,” Haley said Thursday. “My goal is always going to be live within your means, look at what government has already and then make those decisions based on priorities. My first thought is never to increase taxes.”

State Sen. Vincent Sheheen, D-Kershaw, the likely Democratic nominee for governor next year, agrees with Haley. In his book, “The Right Way,” Sheheen wrote: “The time has passed for a simple per-gallon gas tax to solve our problems. We have to do something different.  “With vehicles expected to get more miles to the gallon in the future, revenues over time likely will decrease,” Sheheen wrote.

Instead, Sheheen said he supports using general fund money – state sales and income taxes – to borrow money to fix S.C. roads, which is what lawmakers agreed to do this year. He also said the state needs to look at other ways to pay for roads, including a tax on out-of-state trucks, fees for alternative-fuel vehicles including hybrids and electric cars, and increasing fees for driver’s licenses and vehicle registrations.

Some Republican lawmakers are willing to consider a higher gas tax.

Like most Republicans, state Rep. Weston Newton of Beaufort is careful what he says about the gas tax. Elected to the Legislature in 2012, Newton spent the previous 10 years on Beaufort County Council, pushing for a one-cent sales tax referendum to pay for road projects. After two failed votes, the tax passed in 2006 and raised $150 million before it was ended last year.

Now as Republican legislator, Newton said he is against raising the gas tax. But he won’t rule a tax hike out. He notes “more and more of our trade organizations in South Carolina” – including the Trucking Association and the S.C. Association of Petroleum Marketers – are supporting a gas-tax increase.

“I am not an advocate of raising the gas tax to solve this problem, but I don’t think it ought to be dismissed out of hand,” Newton said. “That makes it more difficult to figure out how to solve the problem.”  Read More.

Budget Issues to be Resolved in Last Official Week of the...