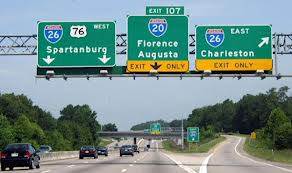 According to Sen. Leatherman, anything short of increasing the states gas tax to fill the gap in road and bridge maintenance funds jeopardizes South Carolina’s economic development prospects. However, Sen. Grooms offered a different approach. Grooms suggested that the state should take $300 million from the growing general fund and dedicate those dollars to road improvements. Rep. Stringer recommended a 5 cent per gallon increase in the gas tax, and indexing the tax to inflation.

While there were different views on how to fund road improvements, the speakers generally agreed that funding the states roads are a high priority.
A recent report suggested that as much as $30 billion was need to maintain and improve the state’s highway and road system. South Carolina’s Department of Transportation’s relies on a 16.8-cent a gallon gas tax. The state currently has the fourth-lowest in the nation. However, the state maintains the 4th largest state road system in the country.
The Infrastructure Forum is part of the Competitive Agenda Series hosted by the S.C. Chamber of Commerce and Parker Poe.