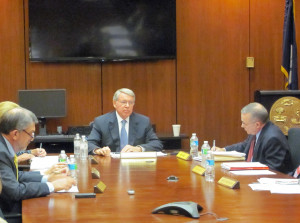 The South Carolina Transportation Infrastructure Bank has unanimously approved $550 million in bonds that would pay for four interstate improvement projects across the state reports the South Carolina Radio Network.   The bonds must now be approved by a committee of state legislators and then the Budget & Control Board before the work can begin.

The list of projects closely follows the South Carolina Department of Transportation’s priority list. State law requires SCDOT follow the priority rankings, but the infrastructure bank (SCTIB) is not bound by that law.  The largest item in the package approved Tuesday was $220 million for the Interstate 85/I-385 interchange near Greenville, which is ranked No. 2 on SCDOT’s interstate improvement priority list.

The bank approved the deal a month after delaying a vote for most of the same projects. The delay came as the bank’s Chairman Don Leonard and powerful state Sen. Hugh Leatherman, R-Florence, said they wanted to put additional money into SCDOT’s top-priority interstate project — the intersection of I-20 and I-26 in northwest Columbia known to locals as “Malfunction Junction” for its heavy traffic, cloverleaf design, and frequent accidents. The South Carolina Transportation Commission had originally left the project out, with commission Chair Johnny Edwards saying its price tag was too high.

As a compromise, the bank board unanimously voted Tuesday to take $20 million from the I-385 project and devote it to engineering work on “Malfunction Junction” and a handful of other projects. Edwards said the move would allow SCDOT to do preliminary work on those roads, making them “shovel-ready” should additional federal money become available in the coming years. He added that SCDOT told him the move would not impact the I-385 project.

“We’re hoping that the federal government’s going to have extra money to give us,” he told South Carolina Radio Network after the meeting. “And we want to be ready to take advantage of that, if it happens.” However, he was not optimistic the federal funds would become available in the foreseeable future.

Another project that would get money for engineering would be a stretch of Interstate 85 in CherokeeCounty close to the North Carolina border. Sen. Leatherman said the money is badly needed along the entire I-85 Corridor. “I-85 is absolutely clogged. There have been lots of accidents up there,” he said. “We had to deal with that.”

The total cost would be about $550 million, paid for with bonds and cash made available by the state legislature earlier this year.  Here is the list of projects, provided by SCDOT:

*  I-85/385 interchange project in Greenville County. The SCTIB will provide $80 million in combination with SCDOT providing $140 million in federal funds. This 4.3 mile project is ranked No. 2 on the Interstate Improvement priority list. This action reflects a reduction in SCTIB funds from $100 million to $80 million. SCDOT has assured the SCTIB Board that the reduction in SCTIB funding will have no impact on the project.

*  Widening of I-20 in Lexington County. This is a 10.3 mile project from US 378 to Longs Pond Road. The project is ranked No. 9 on the Interstate Improvement priority list. Budget for the project is not to exceed $155 million.

*  I-85 widening in Spartanburg and Cherokee Counties – Phase I & Phase II. This 16 mile project ranks No. 18 on the Interstate Improvement priority list. The budget is not to exceed $262 million.

*  I-77 widening in Richland County. This 2.6 mile project extends from I-20 to SC 277. The project ranks No.15 on the Interstate Improvement priority list. The budget is not to exceed $38.7 million. Read More.

Model P3 Contract Must Include Payment Protection Provision for Subs