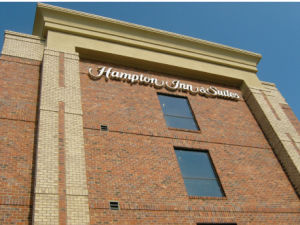 A new hotel planned for downtown Hartsville received the thumbs up from a key city panel, the Hartsville Messenger reports. The Hartsville Architectural Review Board – formerly the Design Review Board – approved a design concept, site plan, building materials and color palate for a proposed Hampton Inn & Suites.

Plans call for a four-story building with about 90 hotel rooms to be constructed on South Fourth Street and Carolina Avenue in The Vista – the former S.C. Central Railroad rail yard. The building will face east with access to the parking area from Carolina Avenue and Railroad Avenue. About 100 parking spaces will be available in the parking lot planned for the hotel.

The hotel will also feature a swimming pool and a conference room, according to Adam Mathews, director of special projects for the city.  Two representatives from the architectural firm developing plans for the project met with the board and presented the plans and drawings that have been developed thus far. Additional plans, including a landscaping plan, will be presented to the board for approval once they are complete.

Board members Bobby Goodson and Bill Segars asked the two to consider some minor alterations to the back side of the building along Fourth Street to give a more pedestrian-friendly look. “This is your back, but it’s Hartsville’s front,” Segars said.

Earlier this month Hartsville City Council gave first-reading approval to an ordinance authorizing the sale of the property for the hotel to Hartsville Ventures LLC, the company that plans to build the hotel. Final approval of that ordinance is expected at council’s regular February meeting on Feb. 12. City officials hope to close on the sale by the end of February.

Work on the site is expected to begin soon after the closing, City Manager Natalie Zeigler said.

The company that plans to build the hotel has committed to invest a minimum of $6 million in the project, and some estimates put the figure at closer to $7 million.

The developer will have 18 months from the start of construction to complete the project, according to Zeigler.

An earlier effort to get a hotel built on the site failed after that developer failed to secure the necessary financing. The city sued to regain ownership of the property so that it could find a new developer and eventually repurchased the property through a settlement.

Under its agreement with the new developer, the city is providing up to $450,000 in incentives, including the $425,000 estimated value of the land on which the hotel will be built and $25,000 to rebate fees the company will have to pay before it can occupy the building.  The city is essentially giving the site to the developer in exchange for a commitment to put at leas $6 million into the project and to create at least 10 new jobs.  Read More.

Groundbreaking Held for the Grand Bohemian in Charleston