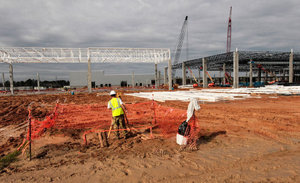 Continental Tire is on track to complete its new $500 million tire production plant in Sumter County by the end of the year and is hiring for 300 production positions there, reports The State newspaper. The expansive plant, being built on a 330-acre site a few miles southeast of the city of Sumter, was a coup for South Carolina when it was announced in fall 2011, helping put the state on pace to become the nation’s biggest tire producer.  Fifteen months later, the 1 million-square-foot production facility is about 30 percent complete and will begin producing its first tires early next year.

The Continental Tire Sumter Plant is well underway after it’s March 2012 groundbreaking. The plant is about 30% complete and is on schedule for making tires in January 2014. These will be the stock preparation, tire buliding, vulcanization and finishing buildings.

Phase one of the massive project, the plant will ramp up by 2017 to roll out about 4 million passenger car and light truck tires each year, the company said. By 2021, the plant plans to produce 8 million tires a year and employ 1,600 people, the company said. “The bottom line for us is that we got through 2012 successfully,” said Craig Baartman, Sumter plant manager, who conducted an hourlong media tour of the site Tuesday. “Every aspect of our plant is on time. We’ve recruited the people and the resources we required.” The plant, which broke ground in March 2012 and began construction in June, hired about 50 production staff and engineers and 18 maintenance personnel last year, Baartman said.

Hiring the required personnel was one of Continental’s biggest challenges last year, Baartman said, even though the plant was flooded with applications. All of the company’s current production plants are 50 or more years old, he said, and the company contended with a worldwide shortage of skilled laborers to get the plant underway.  “This is a long-term initiative, and really, there is a worldwide shortage of craftsmen,” said Baartman, who has worked, among other places, for years in China.

That shortage extends to skilled and experienced personnel in electrical, mechanical and electromechanical trades, Baartman said, including robotics, software and engineering disciplines, and persists in the United States, Germany and China.

As the company ramps up hiring this year, it will be looking for department managers and supervisors, according to plant engineering manager Tom Tompkins, as well as support staff in areas such as finance and IT, production and technician workers and engineers.  Desired qualifications for the production workers include a year of manufacturing experience, good work records and steady employment histories, Tompkins said.  Once hired, production personnel go into training for up to three months, Baartman said, during which time they go into Continental’s plants across the world to shadow-train.

Right now, the company has maintenance personnel for the Sumter plant in training in Continental plants in France, Germany, Portugal and Mexico, readying for duty here, officials said. “We will do the same thing for our production folks,” said David Ray, human resources manager at the Sumter plant. Last year, more than 800 people applied for the initial 22 maintenance positions the company advertised, Continental officials said. The company began advertising for production workers this month, and roughly 1,200 to 1,500 people have applied so far, the officials said.  Read More.