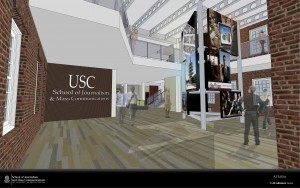 For the first time in nearly half a century, the University of South Carolina’s journalism school is getting a new home.

Construction is underway at the former health sciences building at Greene and Sumter streets. The building will become the new home for the school, which has been housed in the Carolina Coliseum since 1969.

A ceremony to commemorate the beginning of the $25 million project was held Monday. The new building, expected to open in August 2015, will provide nearly double the space for the journalism school, home to around 1,500 students.

“We’ve physically and philosophically outgrown the Coliseum. It’s an inflexible blockhouse, but we’re in a time when the media landscape is vast, evolving and unconfined by real or virtual walls,” Charles Bierbauer, dean of the College of Mass Communication and Information Studies, said. “We also think communications is central to any and every part of the university. And so, the school should be central and visible in its features and functions.”