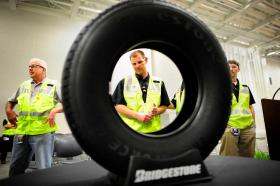 According to Bridgestone’s Chief Project Officer Steve Brooks, the first of two phases of the new plant being built in the Sage Mill Industrial Park is nearly complete, reports the Aiken Standard. Approximately 200 employees already have been hired and are on site now, Brooks said. About 80 percent of those employees are local.

Phase one, which includes construction and equipment installation, is about 85 percent complete, Brooks said. Phase two is scheduled to begin on Monday. That’s the “final building construction phase” and will bring the plant’s size to a total of 1.5 million square feet. Brooks said the second phase should be done by 2015.

When construction of the plant is finished, more than 850 full-time and contractor positions will be filled, Brooks said.

In April, Bridgestone unveiled the first set of tires that was produced by a recent $300 million expansion of its passenger and light truck tire plant in Graniteville. The entire expansion project increased the existing plant’s footprint by 740,000-square-feet and upped its production to 37,750 tires per day, or about 13.4 million tires annually.

Once the new off-road radial tire plant is complete, Aiken County will be the home of the world’s largest manufacturer of Bridgestone tires. The new plant combined with the completed expansion represents a $1.2 billion investment – making it the single largest capital investment in South Carolina’s history.
Read More.