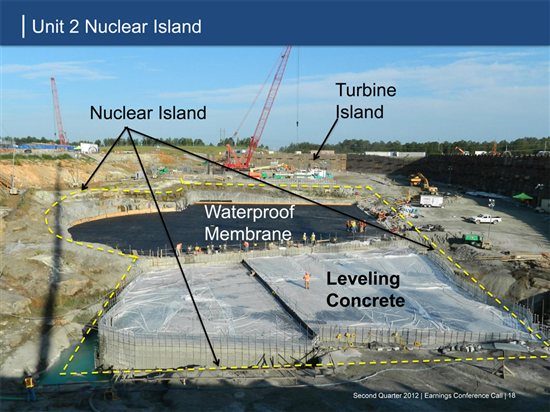 This week crews completed the basemat for the first new unit at the V.C. Summer nuclear plant – a milestone for the reactor that will be among the first to come on line in the U.S. since Watts Bar 1 opened in 1996, reports Nuclear Power Industry News.

The 6-foot-thick basemat serves as the foundation for the reactor’s containment structure and auxiliary buildings within the Westinghouse AP1000 reactor’s nuclear island. According to a Scana release, the concrete pour took 51.5 continuous hours and covered 32,000 square feet.

“This is an exciting achievement for South Carolina Electric and Gas, Santee Cooper, CB&I, Westinghouse Electric Company and others who support our new nuclear project,” said Scana CEO Kevin Marsh in a release.

Last year the Nuclear Regulatory Commission awarded combined licenses for two new AP1000 units each at Southern Co.’s Plant Vogtle in Georgia and at SCE&G’s Summer plant in South Carolina. All four units are scheduled to come online in 2017 and 2018.

At present, the Summer units’ construction workforce totals about 1,550 people, according to Scana. That number should reach 3,000 over the next three to four years. Once complete, each unit will generate 1,117 megawatts and require between 300 and 400 permanent employees.  Read More.